Peace Logistics specializes in providing diversified and professional freight services to Asian countries by both sea and air. With more than 10 years of experience, Peace hopes that our customers will be satisfied with our service.

We are proud to be the leading provider of shipping services in Vietnam and have a close relationship with shipping lines around the world such as: YML, HMM, ONE, COSCO, OOCL, SITC, MCC, CSCL …

Booking directly with shipping lines specializing in international sea freight such as: Yangming, Kline, Evergreen, MSC, ... with the most competitive rates in the Vietnamese market.

A team of experienced voucher staff can provide accurate documents, support for CO, Phyto, etc. With long experience, we are confident to support emergency situations with a professional attitude. to ensure the best interests of customers.

China has many large and small ports throughout the country, the seaports are mainly along major rivers. Here, Peace would like to introduce to customers some of the following ports: 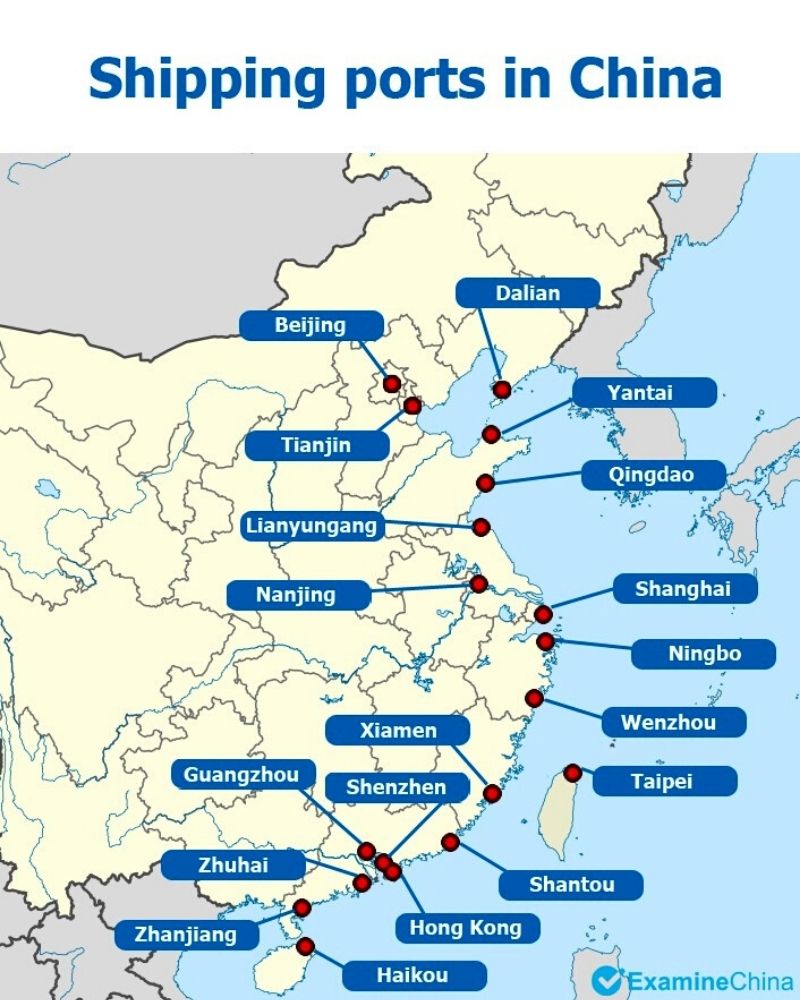 Dalian Port is the largest multi-purpose seaport in the North East of China and the second largest transit port of Mainland China. The port is geographically located near other countries in East Asia and North Asia such as Korea, Japan.

As the main maritime gateway for the capital Beijing, Tianjin/Xingang Port is the largest port in Northern China, and it is also one of the world's major seaports. Located on the west bank of Bo Hai Bay, in the area of ​​Hai Ha River estuary, the port receives and handles most types of cargo from liquids, bulk cargo, oversized cargo, container cargo, etc.

The largest seaport in the world today is China's "Shanghai Port". It is located at the mouth of the Yangtze River with an area of ​​3,619 km2, including a total of 125 berths with a total length of about 20 km. The port receives 33.62 million container units and serves more than 2,000 container ships per month. Shanghai Port handles over 700 million tons of cargo every year.

Located to the south of Shanghai port, Ningbo port is also considered one of the busiest seaports of the world maritime industry in terms of cargo tonnage.

The port has the honor of being the 8th largest container port in China and ranked 17th in the world. Xiamen Port, located on Xiamen Island, is the first mainland seaport to have a direct cargo ship to Kaohsiung Port, Taiwan. Xiamen island area, the government also built an international airport, Gaoqi Xiamen

Shenzhen Port is the common name of a system of ports in an area of ​​260 km along the coast of Shenzhen city, Guangdong province, southern China, including Yantian, Chiwan, Shekou, Da Chan Bay, Mawan ports. The port is 37 km south of Hong Kong and 111 km north of Guangdong, allocating sea and land traffic during peak seasons and providing timely freight services. 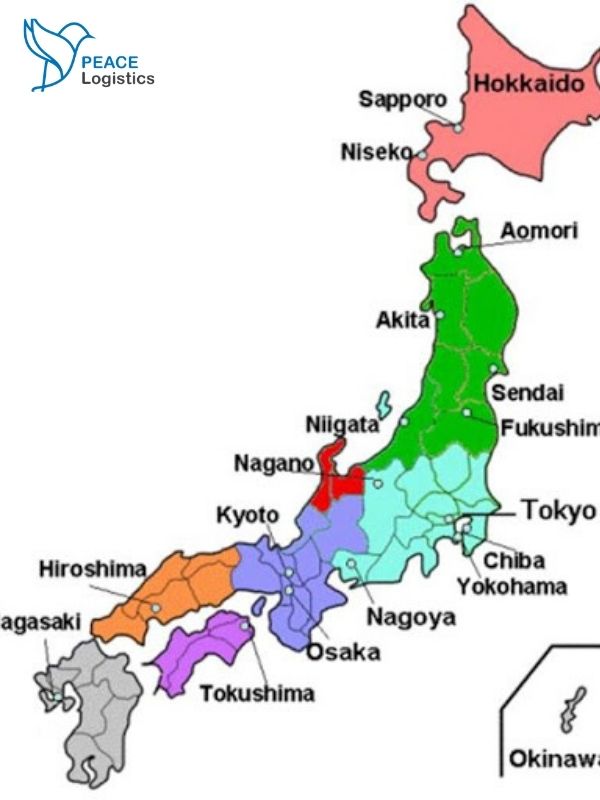 Since 1998, the port of Tokyo officially became an international seaport, capable of handling most of Japan's container cargo. With a remarkable development speed, the port of Tokyo is one of the largest ports in Japan as well as in the world up to the present time. The area stretches over 1,033 hectares of land, connecting popular sea routes from Europe, Asia to the Americas, the annual operating capacity can reach 100 million tons of cargo, equivalent to 4,500,000 TEUs.

Located in Tokyo Bay, Chiba Port is the largest port in Japan with an area of ​​24,800 hectares, spreading operations in cities such as Ichikawa, Funabashi, Narashino, Chiba, Ichihara, Sodegaura.

The port of Yokohama is located in an industrial area that accounts for 30% of the value of goods imported and exported into and out of Japan along with more than 40 million people living here, accounting for one-third of the country's population. Currently, the port provides functions to handle a variety of goods from container cargo, automobile cargo, oil, grain, etc.

Nagoya is the largest and busiest harbor in Japan. This place is also chosen by the big man in the automobile manufacturing industry - Toyota as a reliable and convenient place for exporting cars, which has made the port a major auto export port. most Japan. The port is used as an international port, handling all types of cargo ships (container ships, bulk carriers, super-heavy ships...). 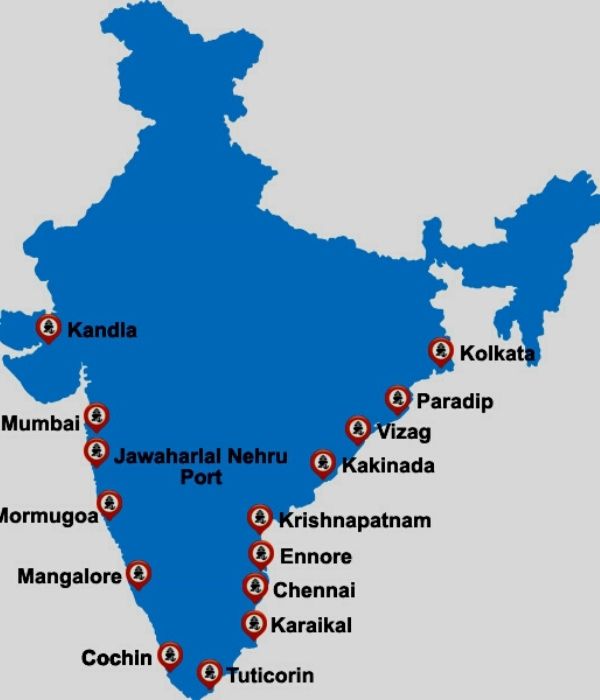 Is the largest port in India by volume of cargo handled. Importing many important commodities such as: Petroleum, steel, textiles, salt, chemicals.

As one of the busiest seaports in India, plays a vital role in enhancing India's economic and trade affairs.

It is the main port of Goa, and it is India's leading iron ore exporter

The Port of Chennai also known as the Port of Madras, is the second largest port in the whole of India.

Currently, the seaports in Korea have a large container volume in and out of the ports, among the top in the world, playing an important role in promoting the national economy.

The port of Incheon is considered the most important port of the country because all business activities on the west coast of the Korean peninsula pass through it.

Port is located at the mouth of the Naktong River, South Korea. It is the largest transshipment port in Northeast Asia. The port is spread over a length of 26.8km, allowing 169 ships to dock at the same time and can handle 91 million tons of cargo/year.

(The above time table is for reference only)

Above is the basic information about shipping services from Vietnam to Asia by sea. There are many ports in the world that our company has done.

If you have a need, please contact us for the best advice and quote! If you still have difficulty exporting or importing and want to find out more details, please contact PEACE or contact phone number:  0911.529.168 (Ms.Lisa) Or visit the website to update more information:  https://dichvulogistics.com.vn/